You are here » Home » Problems we help » Poor Handwriting


Handwriting is an important aspect of childhood, incorporating a variety of complex and intricate muscle movements and visual perception skills. Handwriting is not a simple task, and if left underdeveloped can become a problem later in academic life. The necessary skills required to produce writing are usually acquired in early school years, and honed over the remainder of the school period. Children who struggle with handwriting often develop an abnormal grip to compensate for the lack of muscle development in the hands; this grip is usually the first sign in noticing a child who has poor handwriting.

An occupational therapist would be able to assess why your child may be struggling to write, evaluate the reasons for this and provide effective treatment exercises in clinic, school and at home. The therapist would analyse several aspects of your child's handwriting, including pencil grip, letter formation and visual perception skills, all of which have a great impact on correct handwriting.
Handwriting can be broken down into these key aspects:


Letter formation is the ability of the child to begin to correctly form letters. A correctly formed letter has to start in the right place, curve anti-clockwise and end in the correct position. If your child is struggling to write they may use compensatory methods to overcome this difficulty such as starting in the wrong position, circling clock-wise rather than anti-clockwise or holding the pencil in an abnormal grip.

You may find that the final letter looks similar to the d above, however if it is drawn incorrectly, this can indicate an underlying handwriting difficulty that may be affecting other letters in their writing.


Pencil control is the ability to control the pencil to produce smooth, fluid and continuous lines when writing; it requires a great deal of visual acuity, visual perception and fine motor movements to produce such accurately drawn lines. The ability to control the pencil is a fundamental building block in handwriting development, without this key aspect, children will struggle to form letters that are legible. Often resulting in letters that appear stretched, too large or jittery.


Alignment refers to words written in a horizontal plane, at the same angle as expected for certain letters. For example, the letter p slopes vertically downwards, if a child slopes the p to the left or right, this is incorrect alignment and often results in further difficulties relating to tall and small letters. Children who struggle to align their letters correctly often have writing that is difficult to read and can look disjointed.


Letter spacing is the term used to describe the correct spacing between letters and words, it is often demonstrated through letters that are squashed together or words that seem to mould into one. Poor spacing can have a dramatic effect on the legibility of a child's handwriting and it is important that this is addressed as soon as possible.


The pressure upon which we apply to the pencil when writing determines the legibility and letter formation of handwriting, if the child is applying too much pressure, some letters may appear forced and they will most likely have difficulty completing the more complex letters such as g,y and q as this requires less pressure and a more fluent writing style. Children with poor pressure often find it difficult to convert their writing into cursive format, often due to the poor pressure control.


Visual perception is the ability to perceive the patterns on a page as letters, words and numbers. Children who have poor visual perception tend to have difficulties planning their next words or the next part of their letters and often find it hard to continue writing if their hand is in the way.


As children develop they are expected to write in constrained time limits whilst keeping their work neat and legible, children with dyspraxia or developmental co-ordination disorder often struggle to do this due to the associated difficulties with these conditions. The size and speed of writing can have an effect on children in lessons and ultimately during examinations which can give a poor reflection of their true intellect.


Children with poor handwriting most often develop an abnormal grip when writing, this is to reduce the demands of the muscles in the hand in an attempt to produce more legible writing. This style can often have a detrimental effect in letter formation, size, speed and pressure. An occupational therapist can provide an array of adaptive pencils and grips aimed at promoting the correct grip needed for legible writing. As writing is a complex task, requiring fluent movements, it is often difficult for children to produce these movements unless their fingers are in the correct tripod position to start with. The therapist would be able to work with your child in promoting the correct grip to improve handwriting.

An occupational therapist will assess all of the aspects that handwriting comprises of, and will be able to provide effective therapy and worksheets aimed at improving the aspects listed above. For example, pencil control can be improved through completing activity worksheets that involve tracing wavy lines, following circles and completing mazes. If you think that your child has poor handwriting, or have been alerted to this from school then please email office@otforkids.co.uk or call us on 0330 223 0888 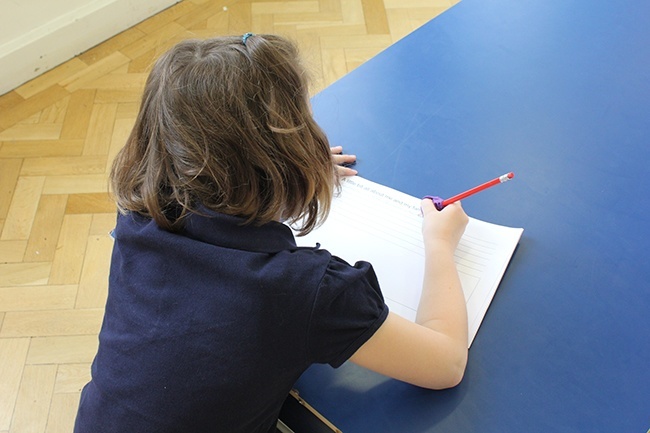 Please contact one of our experienced occupational therapists today and we will gladly discuss how we can help and what services we can offer you.

Below is a list of our clinics, however, we operate nationwide.

We run a range of Groups for children aged 0-18 years.

What people say about us...

OT for Kids have been a great help in aiding my son Jake with coping with his dyspraxia both at home and in school. They came out to our house and completed the assessment at home.

The assessment and report proved beneficial in our discussions with Jake's school and we are very pleased with the outcome the report has helped us achieve.
Jackie, parent.

At our school, there are many children who have difficulty forming letters correctly, concentrate or perform well in P.E, which can impact greatly on their learning. With the support and OT Groups available from OT for Kids, these children have made great progress and are now at a level which is not so concerning. As a teacher and SENCO, I thoroughly enjoyed working (and learning) from the Occupational Therapist.
Emily, SENCO and Teacher.

As a case manager, I regularly deal with many private companies. I found OT for Kids to be highly professional, reliable and provide me with flexible appointments that suited both me and my clients. The OT completed a comprehensive assessment and report, which was not only clear, concise and an accurate reflection of the difficulties, but it was returned to me quickly.
John, Case Manager.

Want to find out more?

We've put together a handy brochure that will cover everything you need to know! 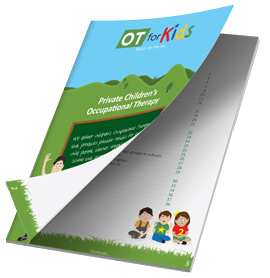 Speak to an Occupational Therapist to find out how we can help you.

We are always happy to answer any questions you might have. Fill in the form opposite and we'll get back to you as soon as possible.